Apple has finally Launched its 2018 Flagship smartphone the iPhone XS, iPhone XS Max and. a cheaper iPhone XR. The new iPhones look completely similar to the last year’s iPhone X in terms of Design, the improvements are only in terms of software and performances. All the three iPhones feature a Notch on the top of the displays that houses the true depth camera system just like the iPhoneX.

The newer iPhones are made from the surgical-grade stainless steel and feature glass casing on both sides. Both the iPhone XS and iPhone XS Max leaves the factory with iOS 12. The iPhone XS features a 5.8-inch OLED Super Retina Display with a resolution of 1125×2234 pixels with the notch on the top of the display like 2017’s iPhone X.

The iPhone XS Max comes with bigger 6.5-inch OLED Super Retina panel with a resolution of 1242×2688 pixel and it has the biggest ever on an iPhone and it also houses the same notch on the top of the display.

In terms of hardware Both the iPhones are housed by Apple’s latest A12 Bionic Chipset, which is said to be one the first 7nm processor chip in the industry. The A12 Bionic chip has six processing cores in total, two focused on performance – with 15% more power and 40% less power consumption than the previous generation – and four performance-oriented ones – that spend 50 percent less power than the CPUs of last year’s iPhones.

The component also has a GPU with four cores for graphics processing and a neural motor focused on AI and machine learning. All in all, Apple’s new handsets can run 5 trillion operations per second, open apps up to 30% less time, and learn more about their personal preferences and traits when using mobile features. Both the phones get 64GB, 256GB, and 512GB as the storage options. 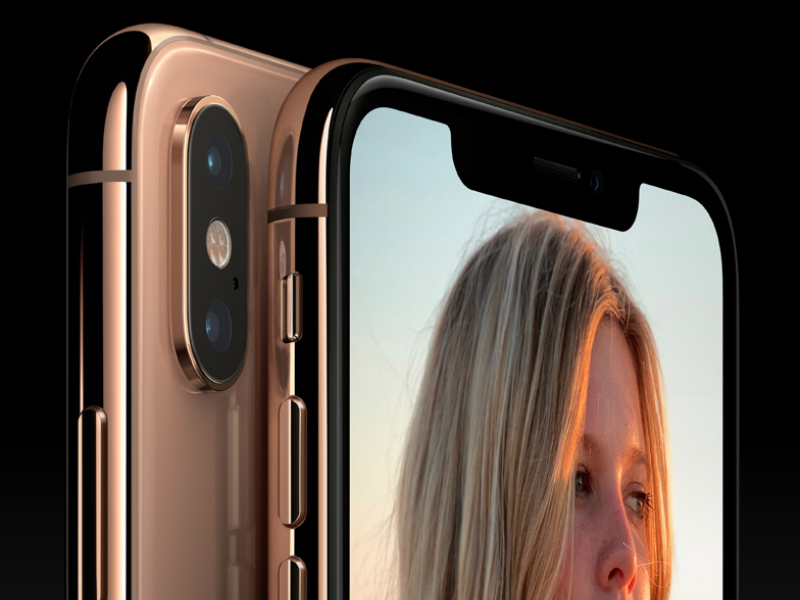 This time the iPhones are also rated IP68 that makes them water and dust resistant, the last years iphoneX was rated IP667. As both, the smartphones features glass so they have support for the wireless charging. The phones come with Type-A to Lightning 5W charger for the power adaptor instead of going for USB Type-C to Lightning 18W charger. However, the 3.5mm-to-Lightning dongle will not be included in the box this time.

This time iPhone XS and iPhone XS Max have support for the Dual Sim, the feature for which the fans are crying for years. And it makes these iphones the first dual-SIM phones from Apple. Moreover, Apple has put in an eSIM just like the Apple Watch that will be supported across the world including the major carriers in India like Airtel, jio and Vodafone. Unfortunately, the Dual sim tray is limited to China.

In the photography department, the new iPhones come with the improved camera system over the last years iphoneX. Both the smartphones have a dual rear camera setup with a 12-megapixel wide-angle sensor (f/1.8 aperture) as the primary sensor and another 12-megapixel telephoto with f/2.4 aperture acts as a secondary sensor. The rear camera gets a 6-element lens and 2x optical zoom. On the rear side, there is an improved TrueTone quad-LED flash. For selfies, On the front, the iPhone XS and iPhone XS Max receive a 7-megapixel RGB camera sensor that’s said to be faster and features an f/2.2 aperture. The iPhones XS, XS Max and also the XR features stereo speakers which are improved over the iPhone X to produce a wider stereo effect and immersive sound experience with enhanced spatial sound and better clarity whether you are watching videos or playing games.